<this appendix is indicated in the Conclusion>

“We leave you with three simple reminders. Treat each other with the greatest respect for you are looking in the eyes of god. Nurture one another every chance you get for you are helping yourself when you do so. Re-member that it is a game and play well together!” - The Group (channelled through Steve Rother, ‘Magnetic Whip: Magnetosphere Whiplash, 15 February 2011, www.lightworker.com/beacons/2011/2011_02-MagneticWhip.php).

‘What I have learned from the Interplanetarians’ by  George Adamski (excerpts from Chapter 9 of Behind the Flying Saucer Mystery, Paperback Library, Inc., New York, U.S., 1961).

p.76-77. “I have never been on another planet, not even on our moon. All I can tell is what has been given to me by those of other planets who have honoured me with their visits. Through the years I have grown in understanding their concept of the Creator as expressed through all forms, and man as an eternal manifestation. It is through this realisation that they have grown in their ability to forget the past and live for the present. They have conscious perception which does not permit them to sit among any group of people without a thought of blessing. For, although the forms may be what we have named ‘human,’ those of higher understanding see them not merely as people, but as the Divine Intelligence in a living state with which they can find no fault.” 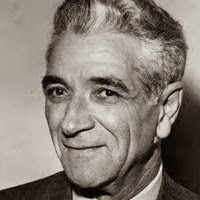 p.65-67. Our planet is but one classroom. Here are lessons to be learned that can be found in no other planet in our system. There are, however, many duplicates of our system throughout the billions of galaxies comprising the Cosmos, as there are duplicates of systems lower in development than ours, and others higher. But, as a child cannot solve the problems of a college man until he has learned the lessons of grammar and high schools, thus preparing himself for the college work, so Man cannot skip rungs on the ladder of life, avoiding certain lessons along the highway of progression.
We might compare Earth with a kindergarten where children of many personalities are gathered in work and play. Here will be found the arrogant, aggressive type; the timid; the introvert and extrovert; the patient and the impatient; the kind and the cruel. It is the purpose of the kindergarten classes to teach these individuals to blend harmoniously with one another. In such a manner self-control is established and group coordination can be brought about.
Here too are taught primary principles in the purpose and operation of the body as a channel of expression of universal life and intelligence. The origin and power of thoughts, with the effects they can have on an individual and his surroundings is also learned. With increased understanding comes greater appreciation, joys and accomplishments.
Instead of recognising the lessons our planet has for its people, we have been taught through the centuries that the human race is peculiar to Earth alone. As a result, rules have been set up by which we live without considering or trying to learn of vaster rules existing throughout the Cosmos.
The space travellers are interested in us, in our ways of thinking and acting, as any humanitarian would be. They come so that they might help us learn the universal laws of life, as a teacher works with her pupils. A successful teacher never talks down to his students. Through understanding their minds and manner of thinking, he endeavours to help the younger ones unfold intellectually. The space visitors serve in this same manner. They do not impose themselves upon us, nor do they take a superior attitude toward us. Rather, realising that we do not understand the laws involved in our thoughts and acts, they live amongst us, hoping that, by their example of harmonious living, they can instil in us a desire to do the same.
I shall never forget the numbers of people who have visited me, loudly expressing their desire to get ‘out of this hell on Earth, to live in the pace and happiness of Venus.’ Yet, when I asked these same people if they were willing to live as the Venusians, they were not. They did not want to give up their pet likes and dislikes. They like to feel that, for one reason or another, they are better than a fellow-being who may not have had the same education, may be of a different colour of skin or religion, or may not have been successful in a business and financial way. Still, it is likes and dislikes of this kind that keep Mankind on Earth divided against itself. There are no such divisions on Venus, although these same differences of colour and intellectual unfoldment, even of occupation exist there as here. So if such people were taken there, with their present attitudes, they would find an even greater ‘hell’ there than here, because they would be alone with their likes and dislikes until they willingly freed themselves from them.
There are those people on Earth who glory in their jurisdiction over others. These too would find themselves very unhappy on a planet where all are considered equal, where one entrusted with authority over others in an educational or community capacity must be the most humble servant among his fellowmen. This, of course, demands a condition of the heart, a love such as comparatively few on Earth have grown into. One cannot learn this lesson through books, only through living. And Earth is where Man is given the opportunity to learn such living, among others who are learning the same lessons. 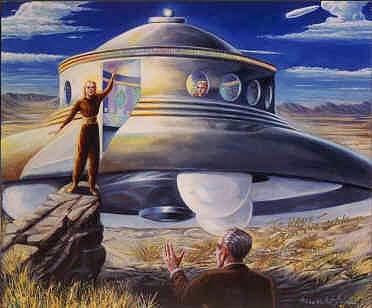 End of Flying Saucers Have Landed by Desmond Leslie and George Adamski, 1953; Adamski’s first account of his experiences.
“A deep analysis of events of the past makes me firmly believe that these people from other planets are our friends. I am convinced that their desire and their object is to help us and perhaps to protect us from even ourselves, as well as that they mean to ensure the safety and balance of the other planets in our system.
But if we continue on the path of hostility between nations of Earth, and if we continue to show an attitude of indifference, ridicule and even aggression toward our fellow-men in space, I am firmly convinced they could take powerful action against us, not with weapons of any kind, but by manipulation of the natural force of the universe which they understand and know how to use. I barely brushed against this force as it was being used in a subdued degree, yet I felt the effects of it for several weeks after the encounter.
I have but one sincere purpose in narrating the foregoing experience: my most urgent message and plea to every person who reads it is:
Let us be friendly. Let us recognise and welcome the men from other worlds! THEY ARE HERE AMONG US. Let us be wise enough to learn from those who can teach us much - who will be our friends if we will but let them!” 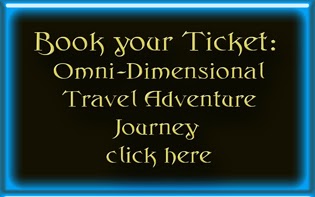